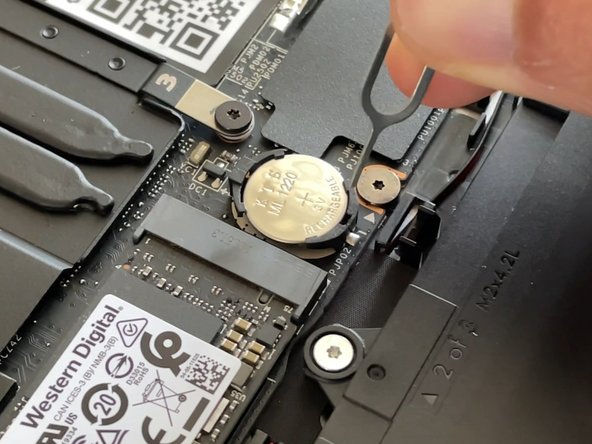 In the event your Framework Laptop isn’t powering on, it may be necessary to reset the state of the Mainboard by fully cycling power to it. Usually you’ll only need to do this if directed to by a Knowledge Base article or by the Framework Support team.

15 other people completed this guide.

Hey I just completed these steps after having a dead laptop[ let ubuntu run it's update and did not power on the next time I was going to use the laptop] , laptop sees daily use so this was a new issue. Only thing I want to note is that the LED lights came on as soon as the battery was reconnected and stayed flashing when the power adapter was reconnected. After assembling and powering on again, the USB-C port went from green to white but the screen remained off. I then pressed the DEL key and the laptop power cycled itself (the USB-C port white led pulsed a bit) and then went into a normal boot again. Not sure if this warrants any hardware replacement but, I have nothing else to blame other than the OS update. 1st issue too , been running smoothly since May 2022!

I also went through this procedure, but I noticed some things that I did not expect based on the instructions. I think the reset was successful eventually (though I did this because of issues with my microphone, which were not fixed, but that was a long shot anyway).

I wanted to go into detail about what I observed in this comment, but it seems the character limit won't let me. The short story is that the leds did not exactly behave as documented, partly because the laptop powered on when I plugged in AC (which is a setting I have enabled in the BIOS, though it seems weird that that BIOS setting was preserved at step 7, and reset like all BIOS settings at the end of the procedure).

I wrote down more details at https://gist.github.com/matthijskooijman... but I mostly suspect that maybe these instructions should be reviewed with the "power on AC" setting enabled. Or maybe the difference is that my battery and/or RTC were not empty, but still charged?

Followed this guide with success. My 11th gen i7 model was not charging after sitting idle for a couple months. I left it in sleep not powered off. So I assume this happens with long periods of no use. I changed the usb c port to all sides with no success. Once I followed this guide it is charging and working and charging again!

I followed this guide, and received all LED indications as described in the various steps. After reassembling the laptop and plugging in the power, there is still no indication of charging after 20 min. The only LED that briefly flashes green on the right side (where my USB C adapters are) No other LED is on, no power button or elsewhere. I will wait a little longer to see if something changes. The instructions do say though that the laptop can be used while charging for the 24h for the coin battery to recharge.

- I changed bios setting to maximum battery 75% and used for a few days, but never allowed for it to run down fully.

- Yesterday I also followed and ran the post-install script https://community.frame.work/t/automated... after seeing the battery life not being great, I chose the hibernate option and left it lid closed, unplugged onite.

- After waiting for 24hrs as recommended by the guid, I still had the issue. No LEDs or lights while plugged in, no power button light, and when pressing power button, only momentary green LED on usbc C side where power adapter was connected. But nothing else, no life or lights.

- Decided to follow the steps again. Waited for red LEDS to blink after reinserting RTC, then main battery, then power adapter. Instead of waiting the suggested 5 min before disconnecting power and re-assembling, I waited 30 min. Then followed remaining re-assemble state. This time, after re-assembly, when I plugged the power adapter in, the normal charging LED lit. I waited a further 30 min, then pressed the power button, and alas, the machine came to life.

Note: When dissembling the second time, when I removed the RTC coin battery, I took the liberty to put a multi-meter across it, and it seemed fine reading about 3.34v so I don't thing the CR battery was flat.